Monitor vs TV for Gaming: Which Is Best (Incl. Helpful Tips)

In this guide we will you’ll find out once and for all, which is better? Monitor vs TV for Gaming.

This has been a very unresolved clash in the world of gaming.

Deciding the better out of the two there are a lot of factors that have to be taken into consideration. Hence, here, we shall well consider all the pros and cons of both sides.

A great number of gamers have started relying on high-tech gaming Monitors to go with their Xbox consoles and PS4s to enjoy all the features that were once only available on the PC.

One may say, looking at the visible aspect, the advantage involved with choosing televisions is the space available on the screen, along with image quality, which is also variable according to the technology used in its production.

Despite this, one may also note that more and more gamers have a preference for a faster and smoother Gaming experience- something that is only well provided by monitors.

To well decide, here are some of the minutes. 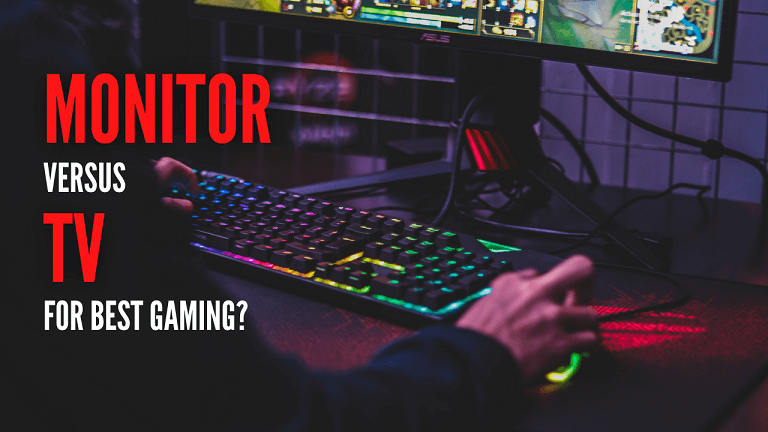 Difference Between Monitor vs TV For Gaming

There are a few things that you should need to consider before making your choice between a monitor and television for a gaming experience.

But, Instead of going to every technical detail, I’ll explain to you in very easy words. If you Prefer to play battleground games such as CSGO and Pubg, then having a higher refresh rate and response rates monitor is very important. At that time, I’ll recommend you to go with a monitor.

Apart from that, If you loved to play simple games, or you have an Xbox or play station consoles, then televisions are the best. You’ll get the best gaming experiences on a much bigger screen with amazing pictures.

In recent times, most monitors are being manufactured at a range of about 21 to 32 inches in size.

Out of which, a greater percentage of monitors that are loved by the people is between 24-37 inches in size, Even so, you may find monitors with sizes as per your convenience, small and large.

Televisions, however, are known to possess the side with the higher ratio in measurements. Your choice of size can vary according to your needs.

The most visible aspect to look at, the resolution refers to the total number of pixels that can be displayed on a screen.

The available range is 1080p, which is Full HD, this resolution is the most common among users, After which is 1440p which is Quad HD, and 2160p known to provide 4K/Ultra HD quality images.

The higher your screen resolution the better your overall picture quality and vibrancy.

For starters, a very important aspect to weigh in on both sides is the response time, which is generally measured in terms of milliseconds.

Response time involves the speed at which pixels of one color shift to another.

This aspect is directly affected by the kind of panel technology that is used in the display. There are 3 kinds of panel technologies, namely- twisted nematic (TN), vertical alignment (VA), and in-plane switching (IPS).

While not much knowledge is needed about the technical aspects of these, it is better to know the kind of experience they give out. TN panels have a great response time, with compromise on the picture quality.

IPS panels give out the exact opposite, with vibrant colors, but not too fast of response. and viewing angles but the slower response.

VA panels take away the prize by providing the greatness of both sides, a fast response time, and great color quality.

When a comparison is drawn between the two, modern TVs have shown a greater response time, in contrast to monitors.

This refers to the frequency of the screen refreshing an image. Its effects vary on monitors and television screens, as a higher refresh rate on a monitor means a smoother view, whereas, on a lot of TVs, this little detail doesn’t offer much of a difference.

The average refresh rate is known to be 60 Hz, but one may find rates of about 144 Hz and more as well.

This factor isn’t really of much significance when choosing between the two.

However, you may note that a 144 Hz gaming monitor can display more than two times the FPS (frames per second) when compared to a good old 60 Hz monitor. 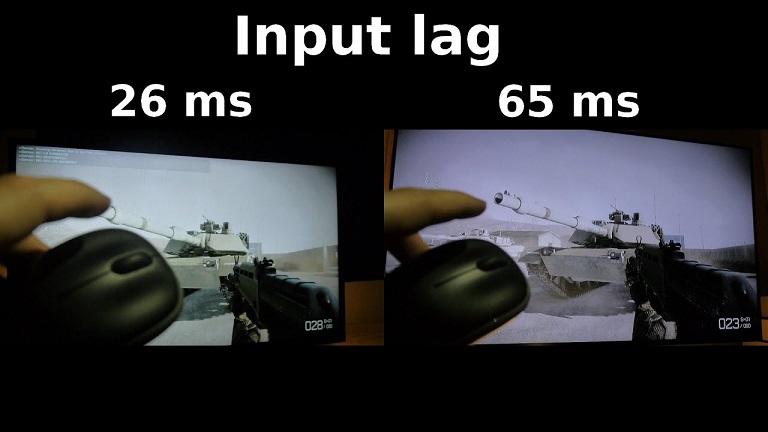 This is an area where the monitor is deemed victorious, the reason for which is a much better stat when input lag is concerned.

Input lag refers to the amount of processing time taken, to display an image on the screen. The television here suffers as it has many filters added to it, to achieve the best watching experience, significantly increasing the processing time, which directly means a greater input lag.

A lag can visibly slow down a gaming experience, which is one of the greatest concerns of gamers these days.

Hence, a lot of gamers tend to choose a gaming monitor, which directly receives signals from the gaming console and relays them to the screen without much hassle and processing involved leading to a much better button go screen response.

You may find a few TVs that possess the ability to reduce a lag from about 60 milliseconds to 20, but a monitor still can’t be beaten with a threshold of about 10 milliseconds.

Hence, choosing a gaming monitor over a TV is a requisite if you are a driven gamer, because of the much-reduced input lag providing you a much smoother gaming experience all in all.

To conclude, Altogether, it is proved after crucial comparisons, that in-between. Meanwhile, You can check out our best cheap 144hz monitors in 2022.

Monitors take away the prize with a much-reduced input lag, lower response times, and a greater refresh rate when compared with TVs.

They are always good for games like Counter-Strike: Global Offensive and Overwatch because these games work on higher refresh rates and response rates.

They provided a complete gaming experience with the most minimal compromise, and be console gaming even more enjoyable for you.

Also, these save you a lot of money in case you are into consoles as well as PC games.

However, TVs don’t back out on advantages as well, as they provide you with greater screen size and are much easier on the pockets, and are a perfect match for those looking for a larger gaming setup.

I Hope, Now you get the idea about which display is going to suit you while gaming with your friends or individually.

I have covered all the points that are enough to tell you which is better between Gaming TVs vs Monitors.

How To Enable GSync On FreeSync Monitor? (2022 Guide)
What Is The Best Time To Buy A Computer Monitor?
What Is Overdrive On A Monitor? (Explained!)
10+ Best Monitor For Counter Strike Global Offensive (2022)
Can I Use My Laptop As A Monitor For My Xbox?
Best Monitor Size For Office Work From Home (2022)
How To Overclock Monitor: Complete Process (Fix)
10+ Best Cheap Ultrawide Monitors 2022 (Curved & Updated)